What's the deal with Spirographs?

It’s the heady days of the 1990s.  You’re 8 years old, hair teased into plaits and it’s raining outside.  You’ve grown bored of buckaroo and no one will play scrabble with you so you’re mother (who has a vested interest in expanding your young, neuroplastic brain) whips out the Spirograph. 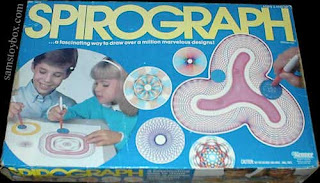 You poke your Disney pencil in one of many small plastic holes in the small gear and push it round and round inside the larger gear creating patterns that, at that age, were just darn ‘pretty’; but at the ripe age of 21, we see they are much more than that, they are hypotrochoid mathematical curves. 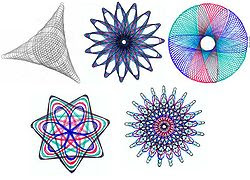 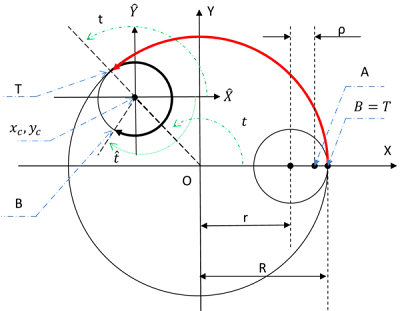 Yeah, I know, and I’m sorry, but I don’t expect you to be able to relate to that jumble of letters.  Basically, Imagine a fixed point set inside one circle that travels along the inside of a second circle. The complex harmony of the position of the point and the diameters of the two circles create a complex looping track.  The different hypotrochoids are determined by the differing diameters of the two circles and the position of the point inside the centre circle where the line is drawn from.

This might help - You can use this applet to change the dimensions of each of the circles to get a better understanding of how the maths affects the resulting shape!
Thanks to Anu Garg for permission to use this applet

An arc generated by a circle traveling along the inside of another circle is not only ruddy beautiful, it is also ridiculously useful!  Guilloché patterns are ‘spirograph-like curves that frame a curve within an inner and outer envelope curve’. So, they are like spirographs but layered over one another.  They are used on banknotes, securities, and passports worldwide for added security against counterfeiting.  If you look closely at any British bank note you will see this pretty pattern in the background.

Phew, I think that’s enough for today.  If you are more Newton than Monet, you can have an epiphanic mathematics-induced high at this page of hypotrochoid equations to wrap your head around.
Posted by kimberleypryor at 10:50