Did the Victorians get the sci-art mix perfect?

The Guardian this week brought us all the action from the MediaGuardian Edinburgh International Television Festival, including a hard-hitting lecture from Eric Schmidt, chairman of Google, who delivered a scathing critique of the UK education system at the annual MacTaggart lecture. Eric spoke of it's failure to make the most of the country's record of innovation in computing and engineering (having invented the TV, photography and the computer both in thoery and practice) and highlighted the lack of support for bringing the sciences and arts back together in schools.

While Eric has since recieved criticism for drawing 'naive conclusions', he has also generated support for his back-to-the-abacus way of thinking. Schmidt said:


'Over the past century, the UK has stopped nurturing its polymaths. You need to bring art and science back together. [The Victorian era] was a time when the same people wrote poetry and built bridges - Lewis Carroll didn't just write one of the classic fairytales of all time. He was also a mathematics tutor at Oxford. James Clerk Maxwell was described by Einstein as among the best physicists since Newton – but was also a published poet.'

The Guardian article generated some interesting discussion in the comments section and while they are by no means all positive, it is good to see people talking about what is important in schools and debating whether it is possible or necesary to return to a Victorian-style education system.

The Guardian collated some of the most well-informed comments in a follow-up article if you're interested. It's great to see the Guardian picking up interest in bridging the arts and sciences divide.
Posted by kimberleypryor at 22:13 2 comments:

Guitar oscillations caught on an iPhone 4

Kyle Jones happened upon this trick when curious to see what filming from inside his guitar looked like. The effect you see is due to the rolling shutter and is not representative of the way strings really oscillate. It's fascinating and definitely a try-it-home trick.

Posted by kimberleypryor at 19:22 No comments:

A pendulum is made up of a weight suspended on a rod, string or wire. When the weight or bob is moved and let go, the pendulum will swing back and forth in a regular periodic motion. The affect of gravity on the bob results in a very predictable periodic motion. The length of the string/rod determines the frequency of its swing - Pendulums have been used in clocks for hundreds of years, because the motion is so regular.

Posted by kimberleypryor at 08:45 No comments:

Another beautiful nebula from NASA 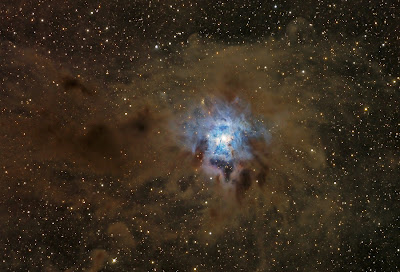 Another post from NASA's Astronomy Picture of the Day that made me sit for a second and absorb the universe's awesomeness in all it's dutsy, ripped-from-a-sci-fi-movie glory.

Sometimes called the Iris Nebula, due to its porpensity to evoke floral imagery, these clouds of interstellar dust and gas have "blossomed 1,300 light-years away in the fertile star fields of the constellation Cepheus".
Posted by kimberleypryor at 16:47 No comments: