I wear my heart on my sleeve

Posted by kimberleypryor at 21:50 No comments:

You are the rose of my heart 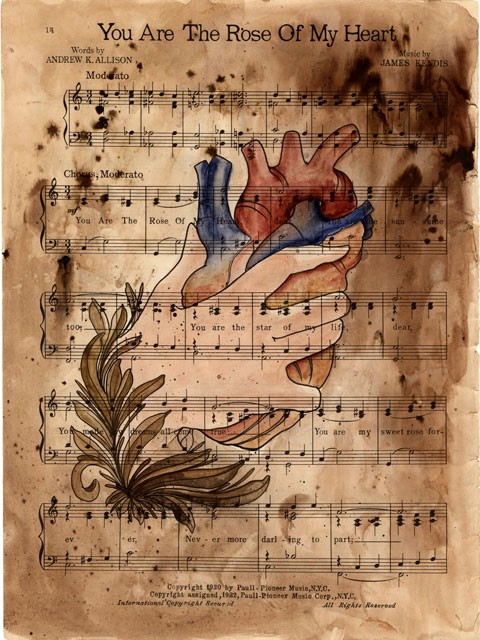 Tattoo and fine artist, Michele Gonzalez, created this beautiful print of a recent watercolor painting on an old music sheet, entitled Rose of My Heart.
Posted by kimberleypryor at 21:08 No comments:

Hold the world in the palm of your hand

I have spent the last half hour in awe at the wares for sale on the website of Bathsheba Grossman who produces 3D laser sculptures in glass paperweights. The weights are inspired by astronomy, maths and science in general. The detail is amazing and they look pretty awesome too.

The Geodynamo: Earth's magnetic field has existed for billions of years, yet the planet is not a permanent magnet: the field would vanish in just 100,000 years if it weren't being regenerated from thermal convection of liquid iron in the earth's core.
In 1995 Gary Glatzmaier (UCSC) and Paul Roberts (UCLA) created the first self-consistent time-dependent simulation of this process in 3D. Their model works: it predicts the poles and the dynamic interior, as well as the occasional global polarity flip.
This Sloan Digital Sky Survey was performed by a 2.5m telescope, located in New Mexico, from 2000 to 2008, covering a solid slice of the the northern-hemisphere sky plus three delicate tranches of the southern.
Our viewpoint is at the center, where the northern- and southern-hemisphere data come together. The features revealed at this scale are composed mainly of the brightest objects; the survey contains more than 930,000 galaxies and more than 120,000 quasars.
And to finish, our own home, sweet, home:
Posted by kimberleypryor at 20:28 No comments: